Archive for the 'Running in the South' Category 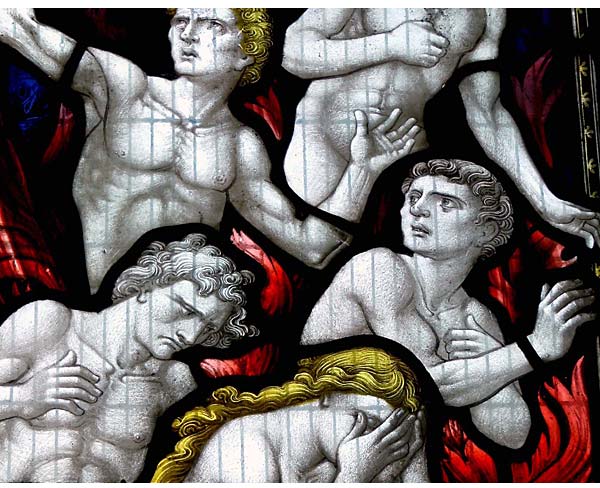 I run with some hilarious characters.

Thereâ€™s this one chap, well read and possessed of a keen wit, who regularly and zealously rouses the locals for the weekend trail-running binge. Heâ€™s become a sort of town crier. Every Friday, he announces the training run, reports on our latest trail ultra results, and offers a succinct weather report. Weâ€™ve come to expect and enjoy it.

With the advent of summer in South Carolina, his job has become much tougher. You try convincing people to run eighteen to twenty miles in the oppressive June heat. In the South, one feels the robust heat index and heady dew point at dawn. It can break the willpower of the most determined runners.

Undaunted, our intrepid motivator has offered up a clarion call to our group and to runners everywhere. Today, he sent out a singularly amazing note. If this doesnâ€™t get you out of bed in the morning, I donâ€™t know what will…

This week I’d like to talk about sin. Not gluttony; not sins of the flesh like coveting your neighborâ€™s wife; not using your mouth to blaspheme instead of raising a joyful noise. No brothers & sisters, I am here to save you from the sin of sloth.

Papists called it â€œAcedia,â€ and they numbered it among the Seven Deadly Sinsâ€”the worst of the lot. You may know them as the Cardinal Sins. Maybe your grandpappy called them the Mortal Sins. Regardless brethren, I’m here to remind you that idleness and listlessness are the handmaidens of the Devilâ€”the tools of Beelzebub himself.

Yes, mighty temptations face us. We are tempted to stay in bed. We are tempted to put things off until tomorrow. Some say the forest is too big, the trail too long, the weather too unbearable. But it is not so. The forest is not too big when you run with your friends. The trail is never too long when others are there to encourage you. The weather is not too unbearable when you meet it with the joy of the Holy Ghost!

No burden will be placed on you that you cannot overcome. I can testify before each of you, the first step out of bed is the hardest step you will take. If you take that leap of faith, youâ€™ll find yourself helping carry the burden of others and discover the load you carry yourself lighter because of it.

Look to the Good Book for guidance; the book of Hebrews in the New Testament:

â€œLet us run with endurance the race that is set before us.â€ [Hebrews 12:1] â€œFor you have need of endurance, so that when you have done the will of God, you may receive what has promised.â€ [Hebrews 10:36]

Can I get an Amen?

Sunrise service will be held at the outdoor tabernacle of Harbison Forest at 5:40 a.m. The forecast calls for heat: 74 degrees and 84% humidity at dawn. Hot? Yes, my friends that is hotâ€” but not as hot as the eternal fires of damnation.

– Deacon Rick (The Other White Meat)

I expect to see everyone in church this weekend, full of the sorrow that leads to repentance. 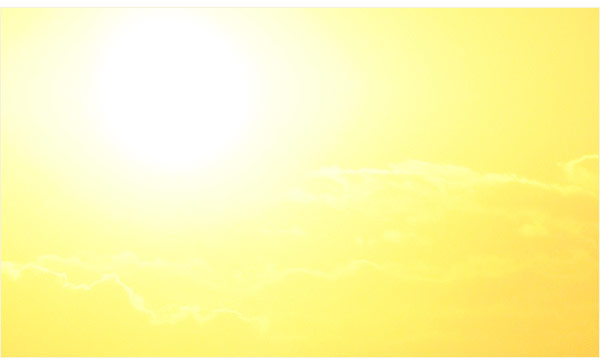 This is not Moose Jaw, Saskatchewan. We expect hot summers here. But August was ridiculous. Half of the month featured temperatures in excess of 100 degrees. Most daytime highs were above 95 degrees. Six official temperature records were broken, including the sweltering 107 degrees on the 10th.

My friends reading from the air conditioned confines of the American Southwest may scoff at these relatively low numbers. But as they say, theirs is a dry heat. Southerners fear the dreaded heat index, which adjusts for humidity and makes our â€œfeels likeâ€ temperatures soar. That 107 degree day felt more like 120+ degrees. Think Phoenix and add an unpleasant equatorial haze.

In such heat, you can almost cut the sweltering miasma with a Ginsu knife. Some days gills would be preferable to lungs. And you canâ€™t count on the cooling effect of sweat. It simply canâ€™t evaporate into the saturated air. Youâ€™re trapped in a sticky, sweaty claustrophobic shroud, even in the pre-dawn hours. Prefontaine help you if you venture into the noonday sun.

I lack the socially awkward perspiration gene, but in this heat, I sweat like Lou Ferigno anchoring the tug-of-war in Battle of the Network Stars. Others fare worse. On a recent trail run, an unrelenting waterfall poured from the elbows of the runner ahead of me. It was like watching a bizarre experiment in rapid human dehydration.

If youâ€™ve ever had a fever, you know a bit about heat exhaustion. Humans precariously balance internal temperature at exactly 98.6 degrees. Raise this by one degree and you donâ€™t have to go to school in the morning. Add just 2.4 degrees, and youâ€™re forced to redirect all priorities and earnestly seek a place to lie down.

When so affected, you feel overheated down to your viscera, as if your insides are cooking (they are). You feel light-heated, nauseous, dizzy and sapped of vitality. Friends remark that your complexion appears exceedingly pallid. In short, you exhibit symptoms not unlike those my children profess when instructed to clean their rooms.

The best solutions include a frosty air conditioned room, a comfy pillow, and children to serve you cool drinks. Since youâ€™d be enervated and listless, I recommend the kids also hold the remote and change channels for you.

I know this from experience. Heat exhaustion descended upon me in force this August. Naturally, I did the only sensible thing.

After the longest, worst four-mile run of my entire life, I visited my doctor. I hoped for a chance to catch up on 2004 editions of Good Housekeeping magazine and ask the odd question about heat-related illness. My clammy skin and excessively laid-back demeanor confirmed the obvious diagnosis.

I forbade my doctor from suggesting the unthinkable: that I cease running. He could tell me anything but that. As I paused to await his advice, I swear I could hear the sound of crickets chirping in the examination room.

After an uncomfortably long pause, we went on to discuss the preferred means of constructing a perfect gingerbread house.

September will not offer much respite from the heat. There are still over 20 days left to summer. I have a funny feeling the weather will soon break, finally offering blissfully chilly temperatures just as I taper for Steamtown. What an unfortunate irony. Note to self: No more early autumn marathons.

Until then, Iâ€™ll pine for the temperate coolness of 90 degree weather. 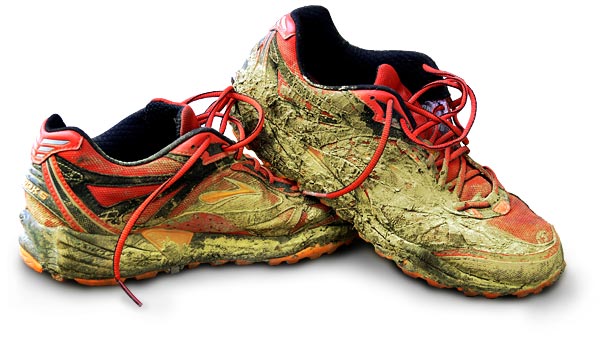 Spring in South Carolina brings with it an airborne menace. You can taste it in your mouth, feel it in your eyes and see it all over your clothes. Itâ€™s pollen; a fine yellow dust thrown into the air by the superabundant pine trees.

The pine is a wind pollinated conifer. The yellow pollen is its male seed, set aloft in search of other alluring conifers to consummate the secret process you giggled about in 4th grade health class. When this pollen is released, the entire South is shrouded in a yellow miasma. You can literally see vast pollen clouds sweeping across the landscape as if from some bizarre late night horror flick: Killer Pollen 2. Itâ€™s our own annual chartreuse dustbowl. And this year, itâ€™s been worse than ever.

According to the Allergic Disease and Asthma Center, the pollen count in South Carolina hit an astonishing 4,862 parts per cubic meter last week. Anything from 90 to 1,500 ppmÂ³ is rated â€œextremely high.â€ Itâ€™s one of the worst allergy seasons on record. But it could be worse. Atlanta hit 5499 ppmÂ³ last week: the pollen apocalypse.

In a cruelly ironic twist, pine pollen prevents Southerners from fully enjoying the mild spring weather. Spring lasts all of 3 weeks in South Carolina, so this is a big deal. Whereas the fresh air of early March would enliven any home, open windows simply invite interior pollination. And so windows remain closed. When the pollen finally relents, itâ€™s too hot for fresh air, and time for the air conditioning to earn its keep.

Outside, pine pollen covers everything. The stuff is ubiquitous. A momentary excursion out of doors risks exposure. If you remain outside for any length of time, youâ€™ll be visibly coated in the stuff. This of course poses a problem for runners, who routinely spend hours outside breathing heavily. The stuff gets in your throat, makes you exceedingly thirsty, and tastes just awful. Ever get really sick and hack up miserable yellow/green mucus? Yeah, you get the idea.

But youâ€™ve not really experienced pine tree pollen until youâ€™ve seen it through a headlamp on a pre-dawn trail run. You can almost count the thousands of individual pollen particles youâ€™re ingesting. Itâ€™s much like a heavy fog if the fog were made up of dusty flaxen allergens instead of water vapor. Delicious.

Lack of rain is blamed for the horrid pollen this year. Rain pelts pollen from trees and mercifully scrubs it out of the air. This transforms the pervasive yellow dust into ghastly yellow paste: the gunky substance that attaches itself to my Brooks Cascadia trail shoes.

Despite all this, I havenâ€™t altered my running schedule. I prefer the unpleasantness of the yellow scourge to the mind-numbing indoor alternative. I enjoy a heavy dose of yellow haze every day because I am allergic to tread mills not pine tree pollen.

Iâ€™m one of the lucky ones.