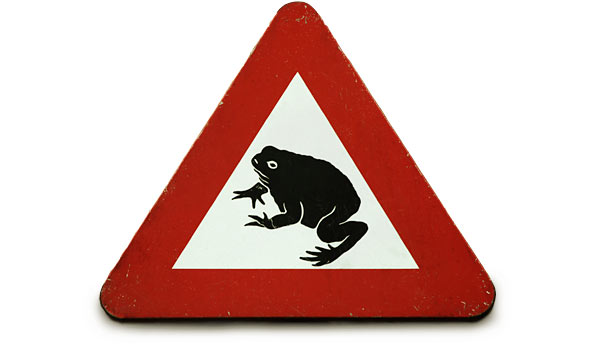 Itâ€™s ever so subtle; unnoticed until itâ€™s too late. A relatively easy training run with a friend begins normally but goes awry. Halfway into the run, the pace slowly yet steadily quickens. The acceleration continues until the nearly anaerobic finish. You never intended to run this fast.

You have been frog boiled.

If you want to boil an actual frog, youâ€™ve got to do it slowly. Turn up the heat too quickly and the frog jumps out of the pot. Turn up the heat gradually, and the frog doesnâ€™t notice its impending doom. New Englanders know this as the Lobster Boil. Business â€œChange Consultantsâ€ use this analogy to rationalize everything from downsizing to well, downsizing.

Ah, but frog boiling is a myth. Frogs it seems are pretty smart, and quite adept at jumping out of all sorts of pots regardless of water temperature. Theyâ€™ll hop right out at the slightest hint of trouble. The only way to boil a frog slowly is to physically trap it. But the runner with a competitive bent can be easily seduced into a frog boil. This happens all the time, even though runners can readily escape their peril. Could it be that frogs are smarter than humans (or at least running humans)?

The frog boil is also something of an art. On one hand it can be a genuine coaching tactic worthy of Mr. Miyagi. On the other hand, it can be a ruthlessly calculated exhibition of dominance; much like the colorfully audacious plumage displays seen on Animal Planet.

The best frog boils involve deception. The boiler insists that the pace will be â€œeasyâ€ or run at â€œrecovery pace.â€ Amazingly, the callow boilee believes these white lies again and again. Not even frogs would repeatedly jump into a boiling pot.

But what of the overtly proclaimed boil? Here, runners voluntarily submit themselves to the sadism of inexorable acceleration. Like Sydney Carton (but without the poetic melodrama), they go willingly to their doom. Imagine announcing to the frog that you are about to kill it ever so slowly. Now imagine the frog being okay with it.

So it seems that runners are pain addicts. Why? Immanual Kantâ€™s transcendental idealism tells us that some things are simply beyond the scope of rational cognition. We canâ€™t know what we canâ€™t know. Serial boiling is like this. Let me know when you figure out why runners routinely choose misery. Then you will have uncovered part of the mystery of the human condition.

13 Comments on “Boil that Frog”