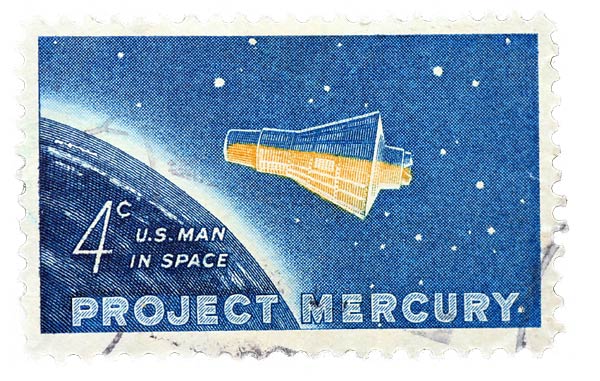 The Rocket City Marathon is held in Huntsville, Alabama, home to the Marshall Space Flight Center, Redstone Arsenal, and the U.S. Army Aviation and Missile Command (AMCOM). Instrumental in the Apollo, Space Shuttle, and International Space Station programs, the city has been at the forefront of American space flight and rocket technology. Itâ€™s a pretty darn important place. Iâ€™ve heard that in the Soviet era Huntsville was quite high on the list of ICBM targets, after only New York, Washington, DC, and NORAD.

I participated in the 31st annual running of the race on December 8th, 2007. Itâ€™s been around for a while, with nary a mushroom cloud in sight.

There are three things you need to know about the Rocket City Marathon. The course twists and turns like a pandering presidential candidate at the Iowa Caucuses; itâ€™s billed as relatively flat, but relatively speaking is not; and like many small marathons, it does a great many things right. 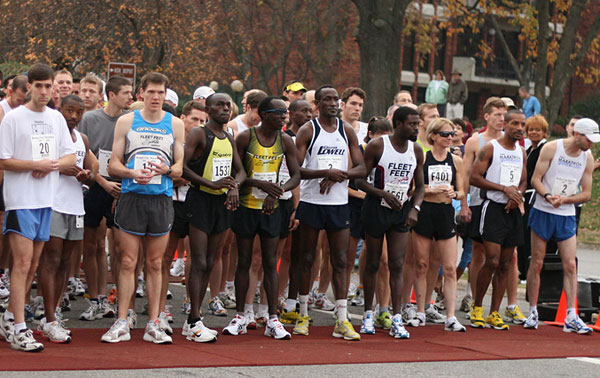 Runners await the starting gun to the high-pitched whine of dozens of timing chips going off at once. I love that sound. – Photo Courtesy Knox_tri.

The Long and Winding Road
If you get lost easily, or get dizzy on simple carnival rides, this race may not be for you. The official Course map lists approximately 70 turns. I havenâ€™t even included the two school parking lots, tunnel, anal-retentive cone placement, and carefully choreographed tangent across a lawn.

The course loops downtown Huntsville, heads out of town in a series of close-quarter turns, completes a larger loop, doubles back on itself, repeats many of the early turns in reverse, and finishes a block from where it started.

Are you getting all this or am I going to fast for you?

Perhaps a simple map would help:

Reconnaissance
When my friends and I set out to preview the course the evening before the race, we got lost several times, and we had the official written directions in our hands. Race officials seem to be sensitive to this complexity problem. Theyâ€™ve created a comprehensive guide that goes to Herculean lengths to describe the course. The guide literally offers a yard-by-yard description of the race. But it doesnâ€™t stop there. It reads like a social studies text book. Youâ€™ll learn more than youâ€™ll ever want to know about Huntsvilleâ€™s architecture and points of historical significance along the course.

Thatâ€™s part of the problem. The guide provides course detail in unwieldy, copious prose. Reading it proved quite challenging even with two people assisting the driver. Iâ€™m betting it would have been maddening to drive the course alone. In fairness, the text was not likely meant to assist a driving tour. I guess thatâ€™s why the guide also includes a simple, concise bullet list of every single turn. Unfortunately, the list is not entirely accurate, with several “ambiguities” in the first few miles.

Fortunately for us, the pavement itself was excellently marked with yellow arrows. This helped immensely, so long as we ignored the older, faded yellow markings from what I suppose were earlier incarnations of the course.

So then, combining the visual map, turn-by-turn list, enlightened historical prose, road markings, and more than one brain in action, we were able to complete our vehicular reconnaissance successfully.

Thankfully, we wouldnâ€™t experience the race via automobile. Complexity is an issue only if a course is difficult to navigate on foot. It was not. Helpful volunteers were positioned at every turn, and there was never the slightest chance of going off course. Really, I enjoyed the winding streets. Long never-ending straightaways numb the mind. 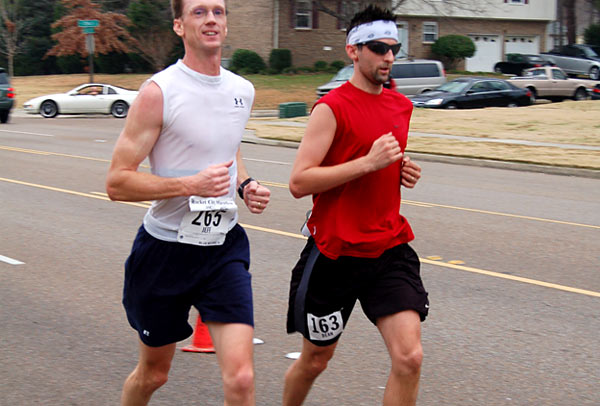 I ran with a fellow named Jeff (left) from about mile 9 until about mile 16. Here we are at mile 13.1, during the only real straightaway on the course. The Huntsville Track Club made high-resolution images available for all.

Flatness is not god.
The Course Guidebook, Web site, and other official communication spend inordinate time defending the relative flatness of the course. Youâ€™ll be peppered with the following facts:

The race directors doth protest too much, methinks.

If you are a frugal person, thereâ€™s no need to shout it from the rooftops, or to repeatedly explain the various ways in which your frugality presents itself. People will see that you still drive a 1992 Mazda ProtÃ©gÃ© and instantly know that you pinch pennies.

Marathons are like this. The Kiawah Marathon doesnâ€™t belabor the almost ludicrous flatness of the course. It doesnâ€™t have to. If you must go on about flatness, chances are your course is not as flat as you say.

Rocket City is a rolling course; simple as that. When runners say â€œrolling,â€ you and I both know what they mean: There are definitely hills. I assure you, when you’re on the incline between mile 21 and 22, youâ€™ll swear on King Hamletâ€™s ghost youâ€™re running up a serious hill.

You should also be warned that the second half of the course features more â€œrolling inclinesâ€ than the first half. But that might be the lactic acid speaking. Iâ€™m still a bit stiff.

But Iâ€™m not here to whine about course elevation. Should all marathons be as level as a high school track to be acceptable, fast, or fun? Certainly not. Rolling courses are not faulty. They have their own rewards, and can certainly be fast. Besides, flatness is relative. After Black Mountain, most everything is a pancake.

Rocket City race officials promote the course as they do because flatness attracts runners. The mere hint of hills dissuades them. And small races must attract runners to survive. So at the risk of sounding controversial, I place the blame squarely on you, the runner.

Method to the Madness
The drive to flatness also explains the courseâ€™s complexity. You see, Huntsville is actually quite a hilly place. The meandering zigzags of the course serve to avoid the prevalent inclines at all costs. Iâ€™m convinced that race officials have created the flattest course possible for the environment. During the race, there are times that hills positively surround you, yet you’ll be on level ground or a rolling hill far gentler than the alternative. Several dozen turns seem a small price to pay.

Rocket City could easily have been an excessively hilly, highly challenging course (not that thereâ€™s anything wrong with that). As it stands, itâ€™s really nicely done, and doesn’t roll beyond reason. Sure, it’s not “Kiawah” flat (few courses are), but you can definitely get a PR here. 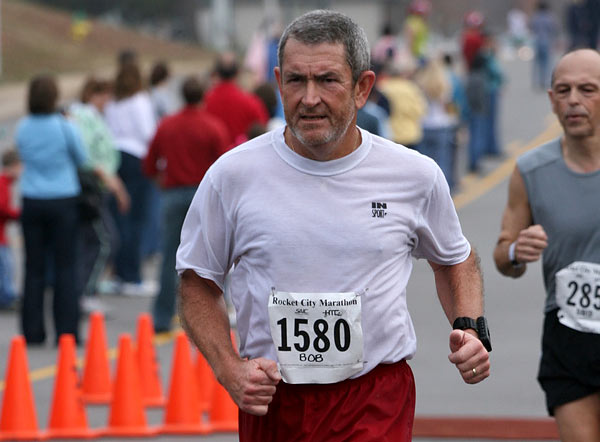 Bob, a friend of mine, approaches the finish. He hadn’t run a marathon since 2004, hasn’t trained a ton recently, yet still busted a sub 3:50.

All This and Soup, too.
Rocket City, like many smaller marathons, treats runners quite well. It excels at the little details, getting them right as rain.

Expo
The expo was small, but offered great deals. Galloway was there if you wanted to chat or get a book signed. Volunteers even let me switch a shirt size when I realized the XL was positively billowing. I was simply told not to mention this to anyone, so letâ€™s keep that on the QT.

Course
The course is quite agreeable, winding through most residential areas, keeping largely off of main roads. Scenery was pleasant. I felt as if I got a solid feel for Huntsville, and found it a lovely place.

Crowd Support
True, Rocket City is low on crowd support. But I wouldnâ€™t tell that to the raucous high schoolers positioned near the half-way point. I tomahawk high-fived some shirtless, chest painted, crazed teens there. My arms still hurt.

I also wouldnâ€™t mention low turnout to the innumerable Boy Scouts on the course, practicing the Scout Law through exuberant volunteerism. And those nice kids who offered bottled water on Bonita Road (or was it Pointcianna Street) really saved my bacon.

And since runnerâ€™s names were printed on bibs, support came on a first-name basis. The encouraging lie, â€œYouâ€™re looking great!â€ always sounds better when personalized.

Crowd support is also relative. You donâ€™t always need thousands of screaming spectators to propel you to greatness. If you need that sort of thing, you should never run a trail race, thatâ€™s for sure.

Racing
The field is limited to 1,500 runners, and thereâ€™s no accompanying half-marathon to clog up the pipes. We warmed up inside the hotel and sauntered across the street to the starting area about 10 minutes before the staring gun. It was totally low-key.

Every mile was well marked with a large, tall flag (a nice touch). At each mile marker, volunteers called out the time with a megaphone. I also enjoyed the 25.2 mile marker, which truly helped one gauge the final push.

SWAG
This year, the race shirt was an understated, light blue, Nike Tech long sleeve, featuring the distinctive (not too garish) Rocket City logo. More and more races now feature tech shirts. Thatâ€™s better for running, but I wonder how it will affect all those plans for massive shirt quilts.

The medal was bright and colorful. As an added touch, finishers were given a bright red wicking hat. For some reason, it felt good to get a hat at the finish. Maybe itâ€™s the racing equivalent of an avuncular pat on the head after a job well done.

I should consult Freud on that.

At the finish, each runner was assigned a volunteer who made sure the runner was physically fine, got their hat, medal, and water, and got their chip removed. This temporary concierge stayed until runners were ready to move on. The boy who patiently waited to hand me water until I was sure I wouldnâ€™t heave was exceedingly polite.

Then there were the massages. This is far from a novel post-race offering, but because there were multiple therapists and the field was not gargantuan, the wait was minimal. Whereas some marathons offer assembly-line treatment, here massages were long and luxurious. Incidentally, I donâ€™t know how those therapists do it. If I had to grope around some salt-encrusted, malodorous runner, probably acting like a big baby after running for 3 hours, Iâ€™d probably vomit.

Bonus: I shared the large massage room with two other guys named Dean. What are the odds of that?

Ah, the soup. Whoever thought to offer this succulent fare should be knighted, declared a saint, or inducted into the running hall of fame at once. They should be blessed in a way commensurate with the salty, aromatic goodness of such gloriously delicious, brothy nourishment. Soup is one of the most effective recovery foods. Ultra marathoners have known this forever. Therefore I decree that every marathon should henceforth offer it. Itâ€™s the new litmus test for long-distance races. 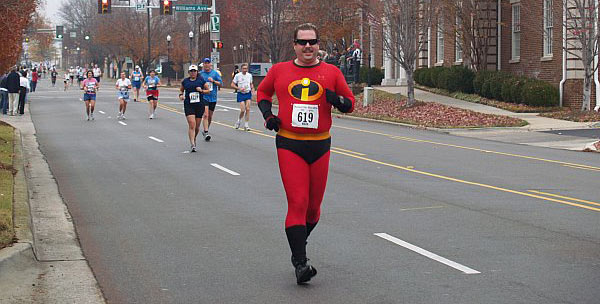 There’s one in every crowd.

Just One More Thing…
Once youâ€™ve run a few marathons, you gain perspective on races that seem to understand runners. Rocket City is such a race. I canâ€™t point to a significant detail done poorly. I never felt inconvenienced or disappointed. I felt like a marathoner at a well-run, well-practiced event. Which is just as it should be. My needs and wants were delivered before I could give them voice, right down to rapid posting of official results. What more could I ask for?

How about complimentary photos?

Get Thee to Rocket City!
I had a wonderful time at Rocket City. Iâ€™m sure the PR helped, but I appreciate well-crafted races.

Just donâ€™t let the flatness thing stop you. It really isnâ€™t too tough and you need more rolling terrain in your life. It will make you stronger.

If you feel the burning need to comment, head on back to the originating post, “Pocket Rocket.“