Archive for the 'Marathon: Boston' Category 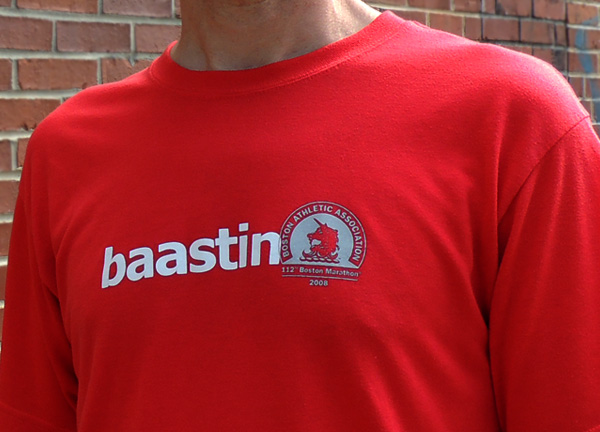 The anticlimactic, maddeningly truncated video is finally up! See below: 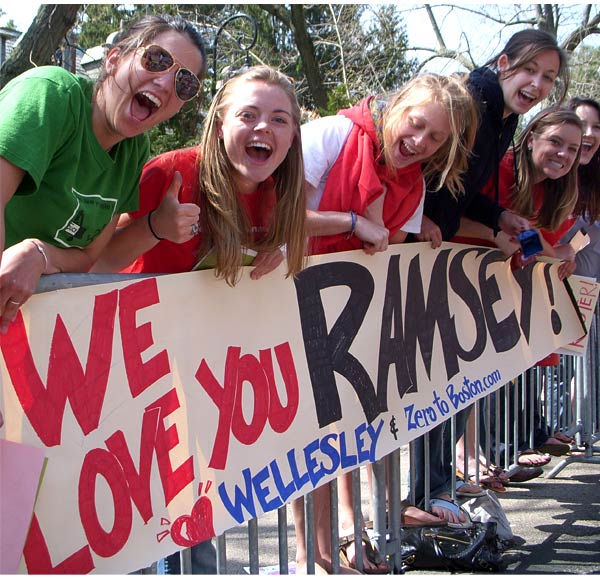 This is the greeting you deserved some twenty-odd years ago from the Wellesley girls. It doesn’t seem fair that you never experienced it; that you never got to run Boston. My measly 3:15 doesn’t hold a candle to your 3:01. But back in the day, qualifying standards were much tougher. And regrettably, injury now prevents you from running this storied race. Doubly unfair.

This may be a trivial surrogate for the real Boston experience. But accept it as a token of friendship and thanks for the miles we’ve run together and the counsel you’ve given. I’d say thanks for the ab class, but my abs are not ready to forgive.

Most of my readers don’t know you. Though I may underestimate your social networking skills, which are prodigiously advanced. I can’t recall running together without a handful of people greeting you, whether on foot, in cars, riding, working or otherwise. Those few who don’t know you would be happier if they did.

I hope this in some small way this gesture assuages any disappointment you may have felt at missing Boston. At least let it show that investments in friendship always reap dividends.

(NOTE: What on earth is that runner doing at the far end of the sign in the video?)

Unfortunately, the final cut of the video contains less than half of the event. Here’s the whole encounter:

DEAN
(Stops at the craziest bunch of Wellesley Girls)
Hey! Hold this for me and…

WELLESLEY GIRLS
(Not a breath lost, they immediately unroll the sign with great enthusiasm. No reason is requested.)

DEAN
Okay, this is for Ramsey. I swear this is not me. It’s really for someone else.
(Takes several photos)

DEAN
(Assuming the Camera is now capturing the scene on video)
On the count of three yell, “We love you Ramsey”

DEAN
(laughing)
Let him have it! Tell…
(Filming actually begins)
.. him you love him! YEAH!

Ah well, the best laid plans often go awry. At least we got a bit of it. Ramsey, somewhere in Wellesley, the girls have your sign. Hopefully they’ll check out the site!

Sorry folks, but my video and pics from the Wellesley Scream Tunnel will be delayed until tomorrow. So very sorry. It was my real goal of the race to have that up for you. This particular project was important to me. Once you see everything, all will be explained.

I took many pictures and I’ll try to get them attached to the various posts I made so you can take a quick look back. That will probably happen by tomorrow evening.

Suffice it to say, I did not have a great running day today. I was hurting as early as mile 14, and the Newton hills kicked my buttocks six ways to Sunday. I should not have been laid waste by a 3:37. But I’ve recovered decently and spent the day post race on the Freedom trail, checking out Paul Revere’s House and the Old North church. It seemed the thing to do on Patriot’s Day.

Thanks for reading everybody! If your name is Ramsey, or you are anybody else who wants to see video, come back tonight between 8 or 9pm or so… I’ll have a very cool video posted for you!

And I’m looking for a place to vomit.

Hey,the crowd’s thinned out. I’m dying on a new hill. And for some reason people keep complimenting me on my socks.

And I think I need to get in shape or something.

I just passed the Scream Tunnel (thanks Boss Frog for the clarification) full of insane and crazy Wellesley girls.

Note to Angie: I kissed no one, in fulfillment of my promise to you.
Note to Ramsey: My mission is accomplished with my Wellesley girls today and you need to come back to Zero to Boston tonight!

Note from Chris: I could not understand Dean’s location… something about a tunnel. Though he is speaking very well for having run 13 miles.