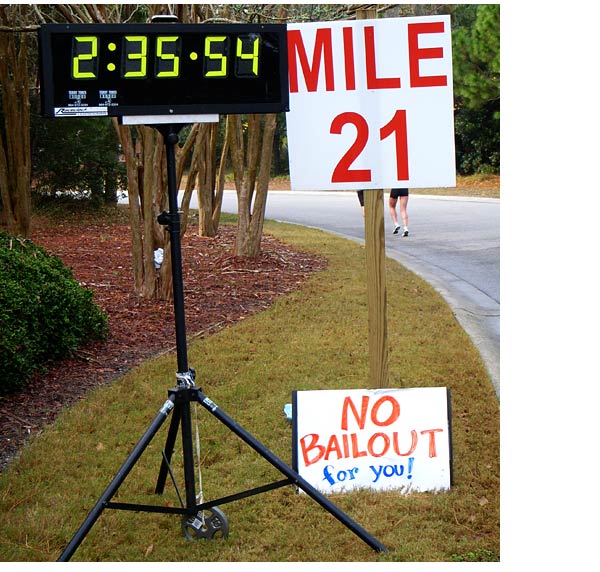 After youâ€™ve run a few marathons, you begin to notice themes. Some races are tougher than others. Some courses are beautifully scenic. Sometimes you run elbow to elbow with thousands of people. Other times you virtually race alone. Within this variety of experience, one constant remains: the imaginative marathon fan.

In a way, marathon fans are more unusual than marathon runners. Itâ€™s one thing to take your body to the point of collapse. Itâ€™s another thing entirely to encourage someone else to do it. And thatâ€™s the rub. Marathon fans are more than just spectators. They have a job to do. They must help their runner drag his or her sorry carcass across the finish line.

Fans have two primary means of cheering runners: vocal chords (drop by Wellesley during the Boston Marathon and youâ€™ll experience this to great effect) and naturally, the hand-made marathon poster.

Creative posters are the spice of the marathon experience. The most inventive rise above the bland â€œRun mommy!â€ or â€œYou can do it!â€ variety. Signs can be witty, sarcastic, comedic, inspirational, confrontational, and yes, even vulgar.

Theyâ€™ve become something of a genre unto themselves. Iâ€™ve found brilliant examples. Hereâ€™s the first batch: 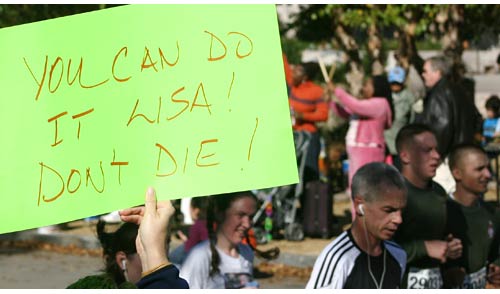 â€œI know youâ€™ve got umpteen thousand status reports to write, but thereâ€™s no rush. As long as you live through the process, management will be completely satisfied.â€

Perhaps the same consideration should be given to this fan, who apparently wasnâ€™t concerned about which way the sign was facing. 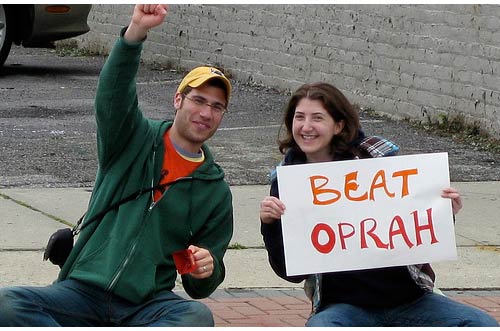 So, these intrepid fans really know how to motivate the meatiest part of the bell curve: By imploring runners to beat Oprahâ€™s respectable 4:29:20.

Another target that could provide supreme motivation: George W. Bushâ€™s 3:44:52. 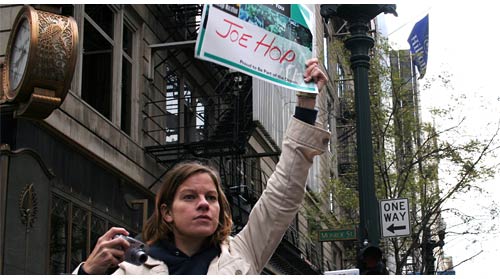 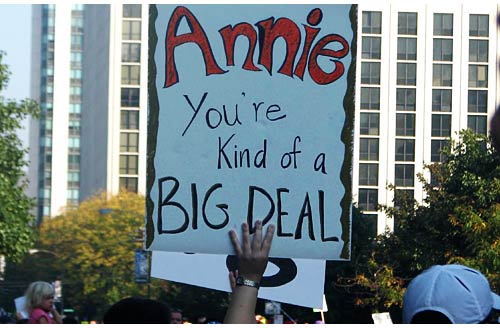 Annieâ€™s sign rises above the din. One imagines the author seeking to inspire uniquely without resorting to exaggeration (or engendering undue pride). He has succeeded brilliantly.

Unless of course Annie was expecting superlative encouragement; In which case, heâ€™s failed miserably. 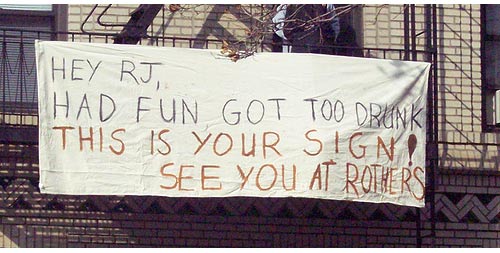 â€œâ€¦ But I still went to great pains to create a highly legible, humungous sign. I also risked my life to hang it on a precarious fire escape while nursing a brutal hangover. So when we get to Rotherâ€™s, youâ€™re buying, dude.â€ 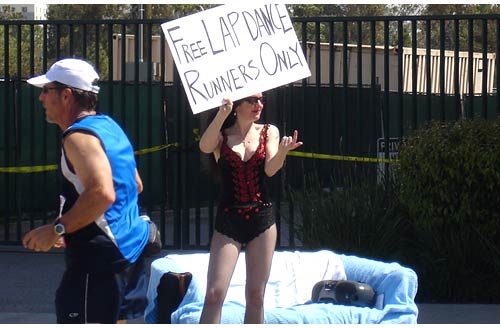 I donâ€™t know whatâ€™s funnier, the (presumed) woman in Fredrickâ€™s of Hollywood lingerie, the outrageous offer or the cheesy covered sofa complete with low rent boom box. An upscale gentlemanâ€™s venue, this is not.

Locals know this to be the infamous Venus de Midol (seriously). Her annual tawdry proposal is not a joke. Yes readers, itâ€™s for real.

I find it necessary to offer prospective clients a few words of advice. If youâ€™re keen for a lap dance, may I suggest a more private setting when you are less exposed publically, clad in something other than marathon attire, not encrusted with salt and can independently verify the gender of the dancer.