But there may also be a competitive subtext on the sidelines. While marathoners run against the clock, some in the crowd engage in a fierce battle of wits. It’s a poster arms race: The more humorously urbane the sign, the more worthy the fan.

With this in mind, let’s examine another batch of marathon posters: 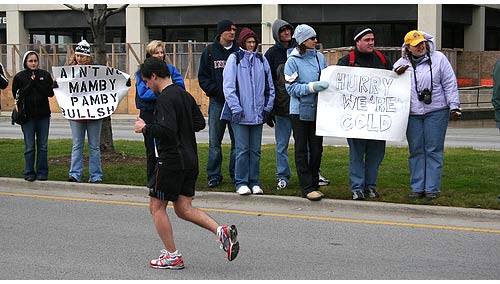 On the right, we see well-meaning marathon supporters, lightheartedly cheering runners. Shivering on the side of the road, they’d clearly be happier if the whole nasty business were complete. Clint Eastwood wouldn’t approve.

Apparently, neither would the spectators on the left, who sport a rather hardcore message. But perhaps this harsh sign is not meant for runners. It might be a challenge to the nearby fans holding the weak-kneed sign. The Namby-Pambyists proclaim, “We are the heartier fans! Bring on the Frostbite!” 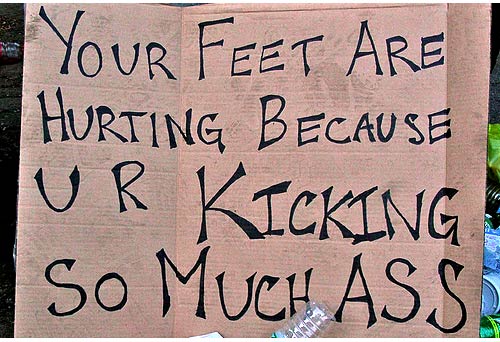 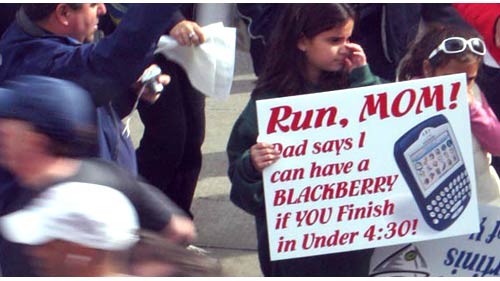 I don’t trust dad’s agenda. He’s using mom’s marathon to prop up his sketchy parenting skills. Consider: A poster like this can’t possibly inspire mom. She does all the work and gets nothing in return. The family budget takes a hit, coach potato dad becomes the undeserving hero and little Veruca Salt gets a better cell phone than me. 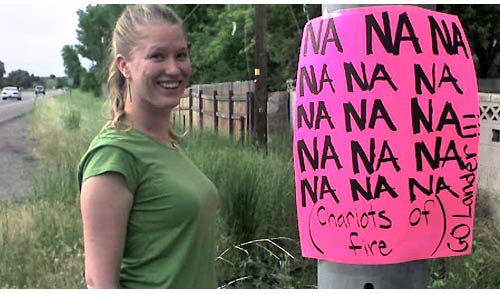 The main refrain to Vangelis’ Chariots of Fire (our most sacred anthem) features precisely twenty-two “NAs.” This sign inadequately offers only fifteen “NAs.”

Without clarification, one might assume the sign referred to “Get a Job” by Sha Na Na (potentially insulting); “The Na Na Song” by Cheryl Crow (lyrics only make sense after mile 25); Possibly the “Theme from Rocky” (three cheers for pugilism); or more likely the inevitable “Na Na Hey Hey Kiss Him Goodbye” by the Chateaus/Steam (hardly encouraging to marathoners).

Right. So this bloke named “Stooz” must really fancy lard. How else could he put up with such cracking, barmy signs? I’m interested in the wee bonny sign on the right. It directs Stooz to “Follow the crowd to free beer, fags and lard.” 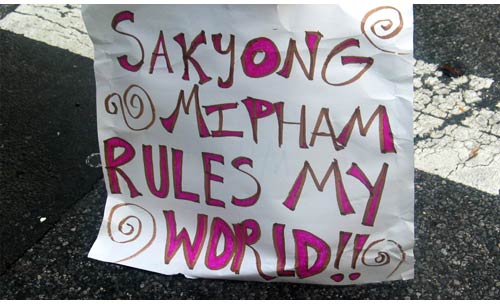 Weldon Smith doesn’t instantly command respect. Dennis Frumperton is nobody’s tyrant. Replace “Sakyong” with “Bill” and “Mipham” with “Jones” and you have one boring poster. 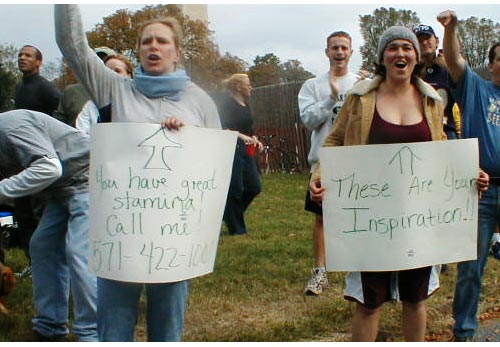 These young ladies offer the perfect fusion of motivation and witticism. Let’s scrutinize their respective messages:

5 Comments on “Curbside Battle of Wits”