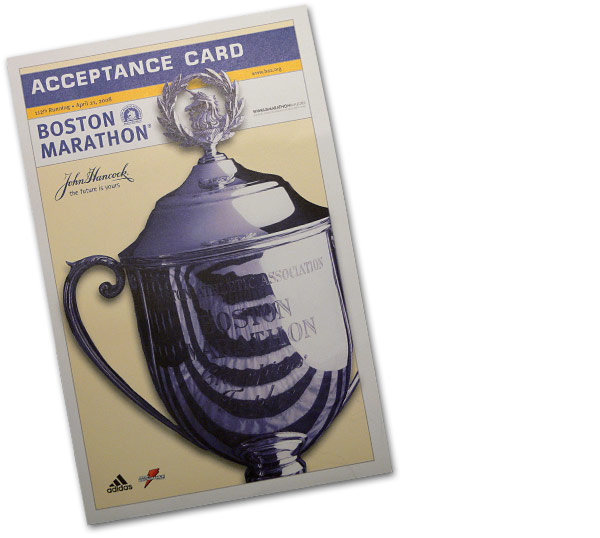 In the finishing chute at the Myrtle Beach Marathon, a runner congratulated me on Boston and asked, â€œWhat was your qualification time?â€ I replied, â€œThree years, seven months, ten days, twenty-two hours, fifteen minutes, and several seconds.â€

I donned a pair of cheap, inadequate shoes in July, 2004, and trained for the 2005 Disney marathon. There I ran an excruciating 4:48. I subsequently got running religion, returned the following year, and ran a 3:31. From then on, I had Boston on the brain.

I bonked Kiawah 2006 and ran Myrtle Beach 2007 just to get the foul taste out of my mouth. Later that year, I wilted in the searing heat and daunting hills of Steamtown; lollygagged in New York; came close at Rocket City; and finally qualified this February at Myrtle Beach, my fourth marathon in as many months.

Iâ€™ve been asked for a split-by-split recap of Myrtle, but Iâ€™ve never found that sort of thing compelling. Few care about the minutiae of anyone not named Brad, Angelina, Paris, or Brittney. And really, can Mile eight be any more interesting than mile nine?

But in light of the occasion, Iâ€™ll bring this egotistical stew to a boil. My splits will just sound more entertaining if you imagine Iâ€™m Ashton Kutcher.

MILE 1 â€“ 8:11
Crowded, Dark, and Drizzly
Temperatures hovered ideally in the forties for the 6:30am start of the 2008 Myrtle Beach Marathon. Once underway I joined the frenetic hordes of half marathoners jostling for position, Jackrabbit relay runners bursting out at 5K speed, and marathoners fumbling amidst the chaos. It was slow going, but I never worry about mile one.

The crowd thinned as we rounded Broadway at the Beach. Already warm in the pre-dawn darkness, I tossed my long-sleeve shirt (instant souvenir) to a bewildered, sleepy-eyed toddler.

This was a strikingly bizarre example of the Doppler Effect. One could hear angry groans of runners grow louder and more pronounced as one approached the mile three. Then the disgruntled expletives gradually receded into the distance as one moved beyond the marker.

Mercifully, the marker was correct this time. But from now on, whenever I pontificate on stellar red shifts and the expanding universe, Iâ€™ll use this metaphor. It canâ€™t miss.

MILE 4 â€“ 7:25
Sunrise
I didnâ€™t like this split, but didnâ€™t want to raise a fuss so early. Pushing for a few measly seconds in the early miles can cost minutes later. You could end up a putrefied zombie after mile twenty.

MILE 5 â€“ 7:20
Relay Exchange Zone
Relay exchanges were awash with runners awaiting their turn with the baton. Sadly, the relay has been scrapped and wonâ€™t return next year. It lent character and idiosyncrasy to Myrtle. The weekend will be the lesser without the hip monikers of teams like â€œScott and the Haremâ€ and â€œPoultry in Motion.â€ I mean that sincerely.

MILE 6 â€“ 7:25
Classic Myrtle
With the sun magnificently rising over the ocean, I ran this borderline split through the cheesy epicenter of the Myrtle Beach strip. If you love San Franciscoâ€™s Fishermanâ€™s Wharf, I-95â€™s South of the Border, or anything in Pigeon Forge, Tennessee (Dollywood anyone?), then youâ€™d love this little corner of Ocean Boulevard.

Here youâ€™ll find the infamous Gay Dolphin. Those not from the immediate area may wonder about the name and what inspires the infamy. The mundane, inevitable truth: Itâ€™s the largest gift shop in America. Elaborately tacky beach themed gewgaw awaits.

MILE 7 â€“ 7:35
The Wall
This must be some mistake. I clearly scheduled my fade for mile twenty-four.

MILE 8 â€“ 6:52
Over-compensators Anonymous
Either this split was dangerously aggressive or mile markers seven or eight were incorrect. The romantic in me prefers to believe in a dramatic righting of the ship.

MILE 9 â€“ 7:19
Boredom
In this nondescript stretch heading toward the exceedingly banal Kings Highway, I returned to ho-hum target pace.

MILE 10 â€“ 7:06
Halls of Montezuma
Iâ€™d been running with two marines for a while. Chatty and exceedingly polite, they moved things right along. I blame them for the drastic inconsistency of miles seven through ten. Iâ€™m sure I had nothing to do with it.

MILE 12 â€“ 7:17
In the Zone
I regularly passed half-marathoners and relay runners. Their looks of encouragement turned to surprise and alarm when they noticed (by my marathon bib color), that I wasnâ€™t a comrade. This sounds arrogant, but Iâ€™ll take what triumph I can get. If I told you how many senior citizens have passed me in the upper miles of marathons, Iâ€™d be too depressed to write.

MILE 13 â€“ 7:18
First Loop Complete
I caught Mr. White Shirt and said to him, â€œNow itâ€™s time for the big boy run.â€ I targeted a pink-clad woman in a group just ahead. I decided to catch them by mile sixteen.

MILE 13.1 â€“ 1:37:02
Half Marathon Actuarial Analysis
Non-runners, ignore the following. It will make your head hurt.

Itâ€™s amazing how good one can feel about twenty seconds.

MILE 14 â€“ 7:13
Counting Chickens
Fresh as a daisy, I cracked an inadvertent smile. Not one to tempt fate any more than reason, I wiped it from my face and settled back into a grim realism.

MILE 15 â€“ 7:13
Reservoir Dogs
Mr. White and I caught Ms. Pinkâ€™s group (about 6 runners) earlier than expected. Since I was dressed in black, together we probably looked like a mobile, circa 1984 fabric swatch catalog. Either that or we were about to commit an exceedingly bloody crime with Harvey Keitel.

MILE 16 â€“ 7:23
The Pace Group
With few runners ahead or behind, we ran in close-knit formation with a beautiful ocean view on our right. Iâ€™d never experienced such energizing solidarity. 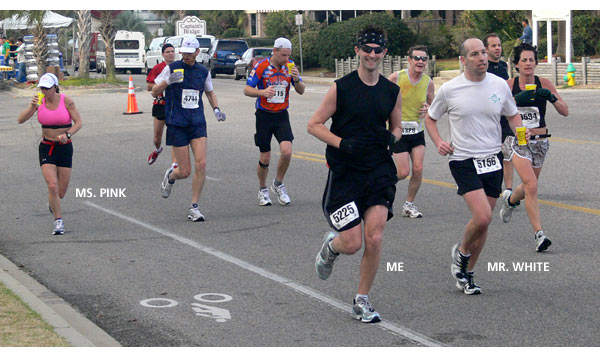 The Unofficial 3:15 Pace Group ran together for most of the second half of the race.

MILE 17 â€“ 7:25
Quiet Please
I didnâ€™t like this split, but the entire group stayed together, alternately drafting in single file (Myrtle can be a bit windy). I remarked to all that we were the unofficial 3:15 troupe. No response. What a serious lot.

MILE 18 â€“ 7:11
Caravelleâ€™s Delight
I owe this excellent split to my familyâ€™s raucous support. For good measure, I burst to the head of the pack as my children cheered and held aloft hand-made posters. My daughterâ€™s curious â€œGo Wildcat!â€ sign probably reflected her fascination with High School Musical 2 more than her devotion to Daddy. 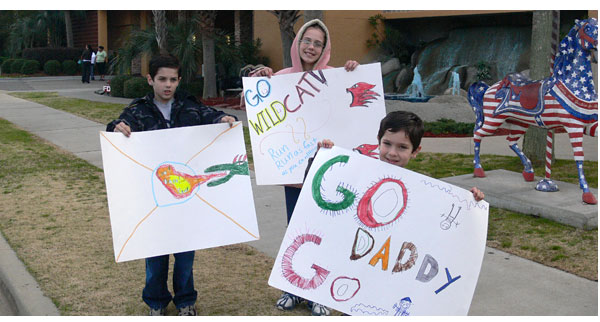 Crowd Support – We have dragons. We have Wildcats. Oh yes, and a “Go Daddy Go!”

MILE 19 â€“ 7:27
Heartbreak Mole Hill
Not a stellar split, but I led the 3:15 pack â€œupâ€ only true incline of the course. Mount Mitchell runners would scoff, but it seemed quite significant at the time.

MILE 21 â€“ 7:18
The Moment
It happened here. When I saw this split (my best ever beyond twenty miles), I knew without a doubt that Iâ€™d qualify for Boston. Only the precise mathematics of the final 5.2 miles remained. I calculated every possible outcome. There wasnâ€™t much else to do on Kings Highway, easily the least inspiring stretch Iâ€™ve ever run in a marathon.

MILE 22 â€“ 7:24
Winter Wonderland
In past marathons, Iâ€™d assume a mile had gone well only to find that I was substantially off pace.

Remember when you were ten years old and the weatherman promised a foot of glorious snowfall overnight? You spent all night anticipating frosty kidapollooza, but woke up to a depressingly snowless day and the correspondingly awful realization that you hadnâ€™t studied for that big math test. Unexpectedly sub-par splits are like that.

Expected dismal splits are far worse. So you can imagine my sense of dread as I struggled through this mile. But at the marker, my serviceable Timex told me I was astonishingly close to target pace.

It was like waking up a week of snow days.

MILE 23 â€“ 7:31
The Mantra
As the 3:15 pack inexorably pulled away, I began a mantra: â€œDonâ€™t be discouraged. Just stay under 8 minutes.â€ I repeated this countless times, creating a cadence. But, I should have chanted, â€œStay as close to 7:30 as possibleâ€. Eight minute miles would jeopardize the qualification math. I preferred Language Arts for a reason.

MILE 24 â€“ 8:01
Turn or Burn
I could have blamed fatigue, the wall, or the one mile slight incline for this heinous split. But Iâ€™d come too far to miss Boston by a few seconds because I failed to suck it up at the end of a race.

MILE 25 â€“ 7:19
Renaissance
Busting target pace at mile twenty-five sealed the deal. I even passed a straggling 3:15 packer, and caught Mr. White. I wouldnâ€™t overtake Ms. Pink and the rest, but now it hardly seemed to matter.

MILE 26 â€“ 7:20
Qualification Management
Enduring the last mile, I felt lethargically slow but was actually smack-dab on pace. Mr. White asked everyone in sight how much farther we had to go. I knew precisely where we were, but couldnâ€™t summon the energy to speak.

MILE 26.2 â€“ 1:50
Finally
Fantasies of a powerful finish bow ignominiously to the power of lactic acidic build-up and glycogen depletion. Mr. White out-kicked me in the chute. I didnâ€™t care. I raised a weary fist and crossed the finish line with a net time of 3:15:02. After all this work, it was over. My qualifying marathon turned out to be my easiest.

The Finish
My kids jumped the fence and met me right after I crossed the finish. They tended to my weary bones and presented me with the Boston Red Sox hat Iâ€™d purchased 14 months earlier, but had never worn. I asked everyone in sight to sign it. Today it looks very much like a legitimate piece a baseball memorabilia. Perhaps someday Iâ€™ll offer it on eBay to some unwitting member of Red Sox Nation. 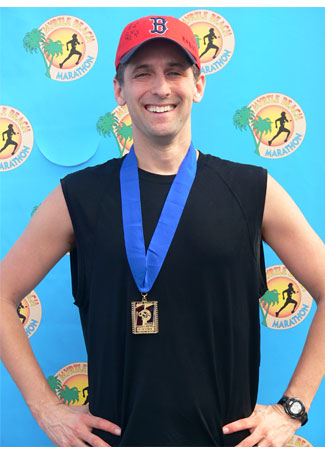 Whatâ€™s Next?
About 45 minutes after finishing, I began wishing I had hit a 3:14 and had beaten Mr. White for 10th in our age group. Then I began dreaming of the assault on 3:10. Before I obsess over that, Iâ€™ll run the 112th Boston marathon on April 21st. I hope youâ€™ll stick with me for the journey.

« A Pint and a Fag
The Other Shoe Drops »