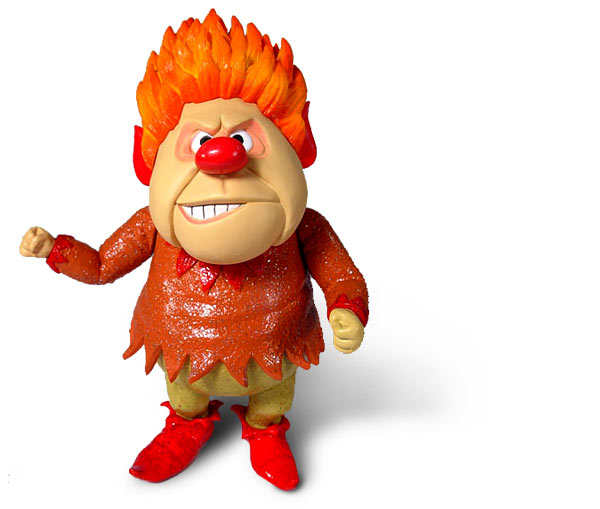 I just ran the Rocket City Marathon (Huntsville, Alabama), finishing with a serviceable 3:20:22. This race did many things right, and was a pleasant counterpoint to the Megathon that was New York.

But I canâ€™t speak well of the weather, unless you enjoy marathoning in 90% humidity in 60-70 degree heat.

Expanding on the trend noted in my previous post, I appear to be in the middle of a marathon warming trend. I canâ€™t precisely say why itâ€™s happening, but evidence shows it to be unmistakable, empirical fact. The marathons I run are decidedly hot, while temperatures immediately before or after are more seasonally appropriate.

Last year, I entered a contest to win entry to the 2007 North Pole Marathon. I failed to win. Since being rejected for one of the most frigid marathons on the planet, I have not seen the slightest hint of a cold marathon.

I smell an inconvenient rat.

EXHIBIT A:
February – Black Mountain Marathon – Uncommonly mild
This race can be blisteringly cold. The summit of nearby Mount Mitchell can easily hit sub-zero temperatures. But 2007, saw some of the warmest conditions ever. Finishers basked in a sun-drenched park. The next day: low thirties and freezing rain. We didn’t complain at the time, of course.

EXHIBIT B:
June – Hitchcock Woods 50k – Sweltering
South Carolina summers are supposed to be insanely hot, so this one doesn’t really count.

EXHIBIT C:
October – Steamtown Marathon – Oppressive
Autumn in Pennsylvania should mean crisp, cool weather. But Steamtown was held the same infamously hot day as the decimated Chicago Marathon. I finished (uphill) in 80+ degree heat. When I peeled my singlet off and threw it on the sidewalk, it landed not in silence, but with a resounding thwack!

EXHIBIT D:
November – New York City Marathon – Temperate
The weather was admittedly decent for this one. But for the record, anytime you can run shirtless in or around New England in November, you are on the leeward side of the temperature bell curve. Just a day prior, a biting, frosty wind howled through Manhattan’s concrete canyons.

EXHIBIT E:
December – Rocket City Marathon – Quite Humid
This past weekend there I ran balmy Huntsville. Temperatures were seasonal (lows in the 30s) days prior to the race.

Some say Iâ€™m an alarmist, overstating my influence on racing climate. Some say Iâ€™m the harbinger of warmer races to come. Some have taken to calling me â€œHeat Miser.”

Whatever I touch, starts to melt in my clutch.