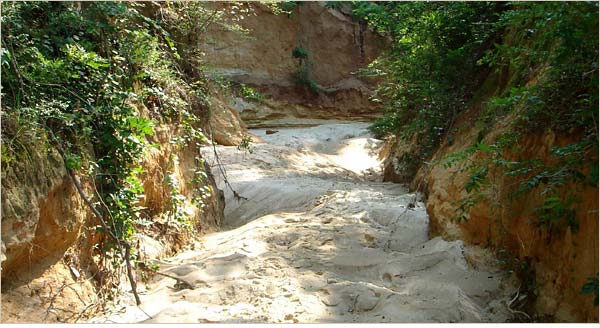 Well I did it. I ran my first ultra marathon. It was simultaneously exhausting and exhilarating. Please read my Systematic, Hydramatic, In-Depth Hitchcock Woods 50k Race Report. I spent longer on the report than on the course.

Iâ€™m known as the guy trying to get to Boston. Itâ€™s a marathon thing. But when I announced Iâ€™d be running a 50k, a reader welcomed me to the â€œraw and honest world of ultras.â€

Is the marathon somehow too glamorous? Full of poseurs perhaps? It certainly has become a populist sensation. Far fewer people run ultras. For them the marathon may have lost its luster. Itâ€™s become too accessible.

Ultras are smaller and attract little in the way of spectators, sponsors, or prize money. Marathoners ask, â€œIs the race shirt cool?â€ Ultra marathoners ask, â€œIs there a shirt at all?â€ Marathoners become radically incensed when mile markers are inaccurate (Like the horrendously misplaced three mile mark at Myrtle Beach this yearâ€¦ or so I hear). Ultras feature no mile markers, no massive clocks and typically no high school marching bands. Sometimes distances are merely close estimates.

Road marathoners fear the â€œwall.â€ With luck, they hit the finish line before fading horribly. In an ultra, the crash is inevitable. The trick is to plan for it, gut it out, and come out on the other side still moving. Not even Karno the magnificent has enough inherent glycogen stores for a forty mile run.

So, is the ultra better? Crazier?

No, itâ€™s just different. If greater distance were the paragon of virtuous running, Roger Bannisterâ€™s ho-hum four minute mile would not be celebrated. I know Iâ€™ll never look askance at a marathon accomplishment.

Yet I canâ€™t deny the lure of races run far from the maddening crowd, largely untarnished by the mass commercialization and commoditization of modern culture. Thereâ€™s some purity in that, yes.

I loved my first ultra.

Please read my 2007 Hitchcock Woods 50k race report. Then come back to this post to offer comments.

15 Comments on “Raw and Honest”