The Massacre of Wounded Knee 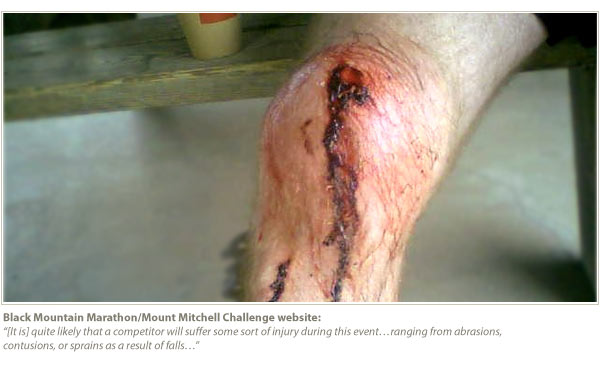 At the end of an endurance race, you donâ€™t expect people to look their best. You expect to see haggard, salt-encrusted faces staring back at you behind plates of orange slices, salty chips, and bananas. Finishers tend to sport a curious mixture of exhaustion and elation. Theyâ€™re psychologically energized, just not ready to go out on the town. Such was the case at the 2007 Black Mountain Marathon. But this time, the typical post-race gathering was broken by a scene of more lurid graphic interest.

I ran the marathon while my comrades ran the full 40 mile Mount Mitchell Challenge. I had the luxury of waiting for them to finish. One friend (Weâ€™ll call him â€œRockâ€) came in at 6:37:32, a full hour better than his previous record. Time to celebrate a well earned PR! I expected to see a predictably worn-out runner. I got carnage.

Apparently, Rock took a fall at the summit, badly jamming two fingers and cutting open his knee. Iâ€™ve seen scraped knees before. As a dad, I simply tell my kids to get up and quit overreacting. Rock ran 20 miles down a mountain on much more than a scrape.

As if the blood streaking down his leg wasnâ€™t enough, the knee swelled mightily at the finish. It was a complete bloody mess. You couldnâ€™t actually see the knee. It was hidden beneath a supperating, spasmodic hematoma the size of a cantaloupe. Yuck.

In polite society, this would be cause for sober concern and immediate medical attention. But Rock was surrounded by runners hopped up on post-race endorphins. Who else would react with such delighted fascination? They congratulated Rock on his wound and virtually fell over themselves photographing it enthusiastically. This includes the official race photographer at the behest of the race director. It was a sight evocative of the British Paparazzi. The scene lacked only flying undergarments from overly zealous fans.

In less extreme circumstances, this crowd response would seem quite unsettling. At the end of a trail race of this magnitude however, it just seemed normal. Well, as normal as this sort of thing can get. No one runs 40 miles up and down a mountain just to lose a few unwanted pounds. Ultra marathoners seem to actually enjoy mental stress, physical suffering, and general anguish.

For them, the only thing better than a brutal run, is an accompanying glamour injury; nothing that prevents future running (no one wants to play the role of the doomed Lakota Sioux). Injuries should be just serious enough to engender fascination and dare I say it, jealousy.

I know runners (myself included) who think Rock had a PERFECT day. He ran a bona fide ultra marathon up a mountain, secured a gargantuan PR on a hobbled knee as gross as it was fascinating, and was sped off to the ER amidst fawning peers.

And thatâ€™s just one story from the race. Read more in my FULL RACE REPORT of the Black Mountain marathon/Mount Mitchell Challenge, one of the best races East of the Mississippi.

8 Comments on “The Massacre of Wounded Knee”