The Rich and Famous Poser Exemption 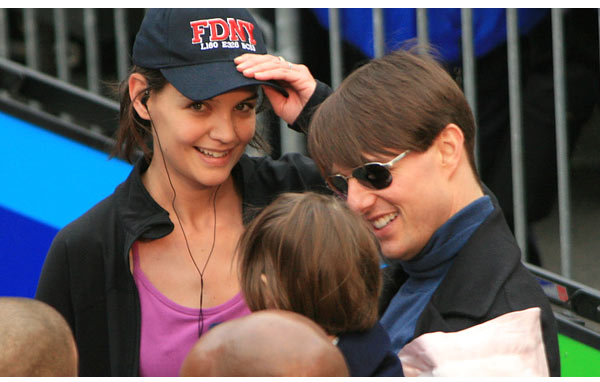 Photo courtesy of Loren kahleSo, is Katie running Boston or what? Unless weâ€™re in for an April surprise, it appears not. For a while, I wondered if she intended to run every marathon Iâ€™ve entered. Just who is stalking whom?

Well, Iâ€™m pretty sure she hasnâ€™t qualified. Her 5:29 marathon in New York would only suffice if she were eighty. Tom is one weird dude, but I donâ€™t think heâ€™s making babies with an octogenarian. If sheâ€™s interested, Katie will have to run Boston under other auspices.

People run Boston without qualifying, either through sponsorship or by supporting charity. Both options are legitimate, even fabulous. But somehow I find callow celebrity participation irksome. Am I simply jealous? Maybe. Iâ€™m certainly not surprised that the wealthy and illustrious get preferential treatment.

Letâ€™s assume celebrities give regularly to charity (though Iâ€™m not sure Scientology counts). Itâ€™s unlikely that they need to give further via marathoning. And they almost certainly donâ€™t require a corporate exemption. Stars run races like New York and Boston because these races are, well, New York and Boston. Luminaries participate because they can.

But Joe Six-Pack canâ€™t enter these races on a whim. New York features a lottery system, and Bostonâ€™s standards have become legend. Jumping directly to the exclusive, high profile marathons smacks of privilege and entitlement; not something that would play well with the tabloid set.

One must take Hollywood gossip with a rather enormous grain of salt. Katie may never have intended to run Boston. But itâ€™s just as likely that she backed off because of potentially caustic publicity. If so, score one for the purists, or at least the grocery store check-out straw poll.

Iâ€™d accept celebrity participation in Boston more readily if these folks first paid their dues running plebeian marathons like New Jersey or Myrtle Beach (regardless of finishing time). I just want them to take running seriously. Run a half marathon, local 5k, family fun run or something. Throw the running gods a bone.

Thankfully, some stars get it. Will Farrell proved himself by working down to a sub-four hour marathon. He treated our sport respectfully, and purged his engrams with sweat. Thatâ€™s worth a few more movie tickets in my book.

I swear, if I read in The Enquirer that Brittney is running Boston, Iâ€™ll blow a gasket.

5 Comments on “The Rich and Famous Poser Exemption”